“Organic architecture” is a term coined by Frank Lloyd Wright, primarily used today to describe “…a harmony between human habitation and the natural world through design so sympathetic and integrated into the site that buildings,
furnishings, and surroundings become part of a unified, interrelated composition”.

Eric Corey Freed takes a more seminal approach in making his description: “Using Nature as our basis for design, a building or design must grow, as Nature grows, from the inside out. Most architects design their buildings as a shell and force their way inside. Nature grows from the idea of a seed and reaches out to its surroundings. A building thus, is akin to an organism and mirrors the beauty and complexity of Nature.” 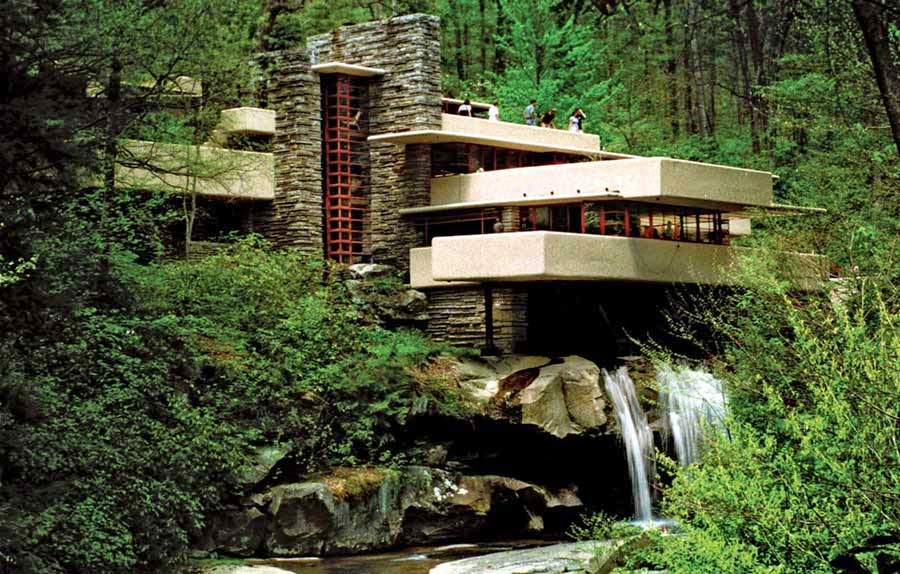 “Fallingwater”,  or the Kaufmann Residence, is a
house designed by architect Frank Lloyd Wright in 1935 in rural
southwestern Pennsylvania, 43 miles (69 km) southeast of Pittsburgh. It
was designated a National Historic Landmark in 1966. Fallingwater stands
as one of Wright’s greatest masterpieces both for its dynamism and for
its integration with the striking natural surroundings.
Wright’s
passion for Japanese architecture was strongly reflected in the design
of Fallingwater, particularly in the strong emphasis placed on harmony
between man and nature.
Integration with the setting extends even to small details; for example,
glass and horizontal dividers are run into caulked recesses in the
stonework so that the stone walls appear uninterrupted by glazing. From
the cantilevered living room a stairway leads directly down to the
stream below, and in a connecting space between the main house and the
guest level a natural spring drips water into the interior, which is
then channeled back outside again. The sound of water permeates the
house and locally quarried stone walls and terraces resemble the nearby
rock formations. The design incorporates broad expanses of windows and
balconies which reach out into their surroundings. 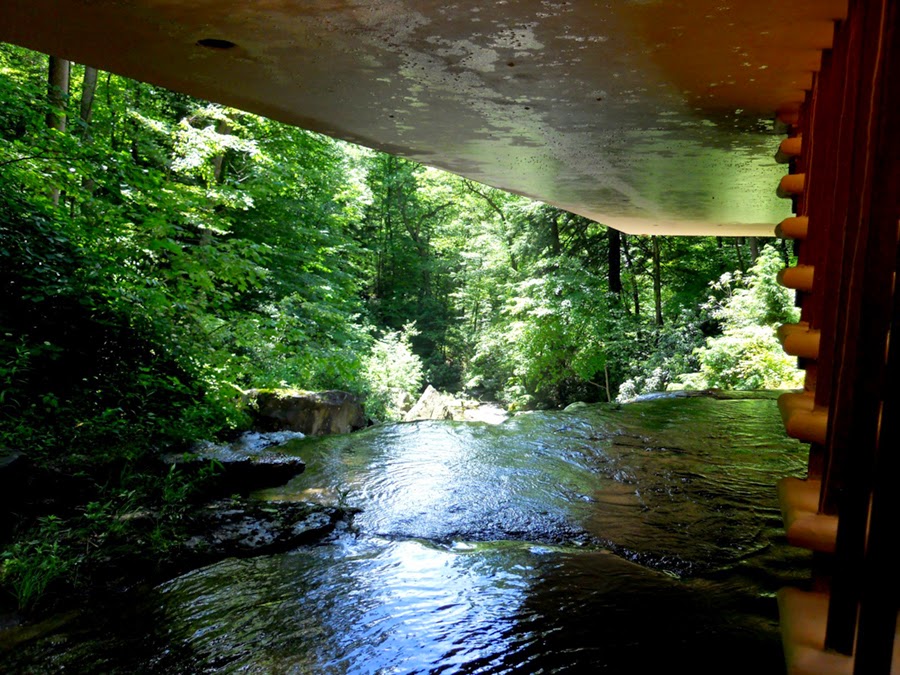 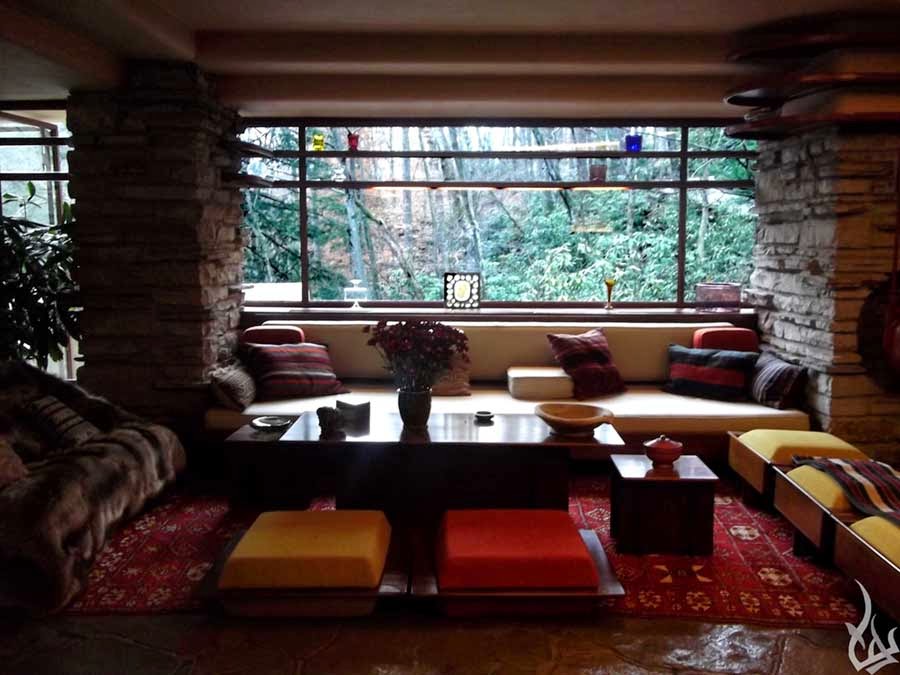 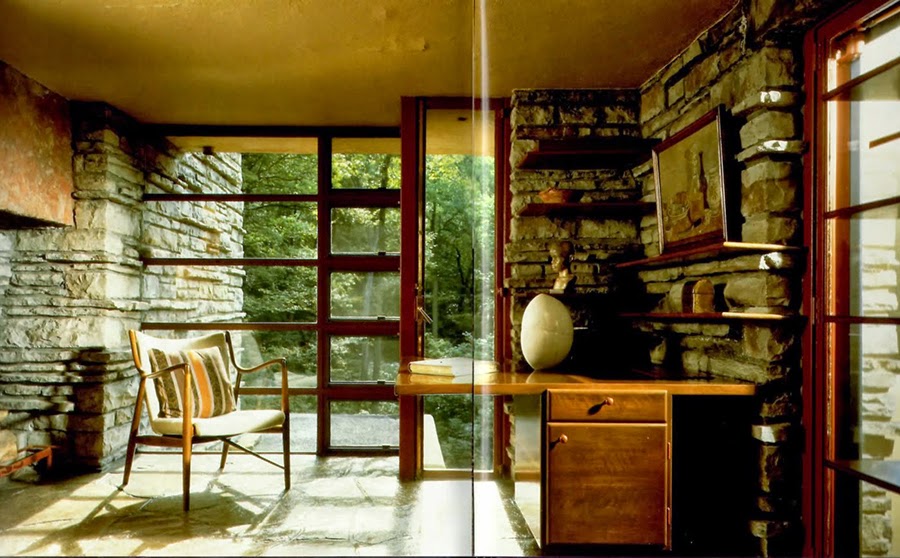 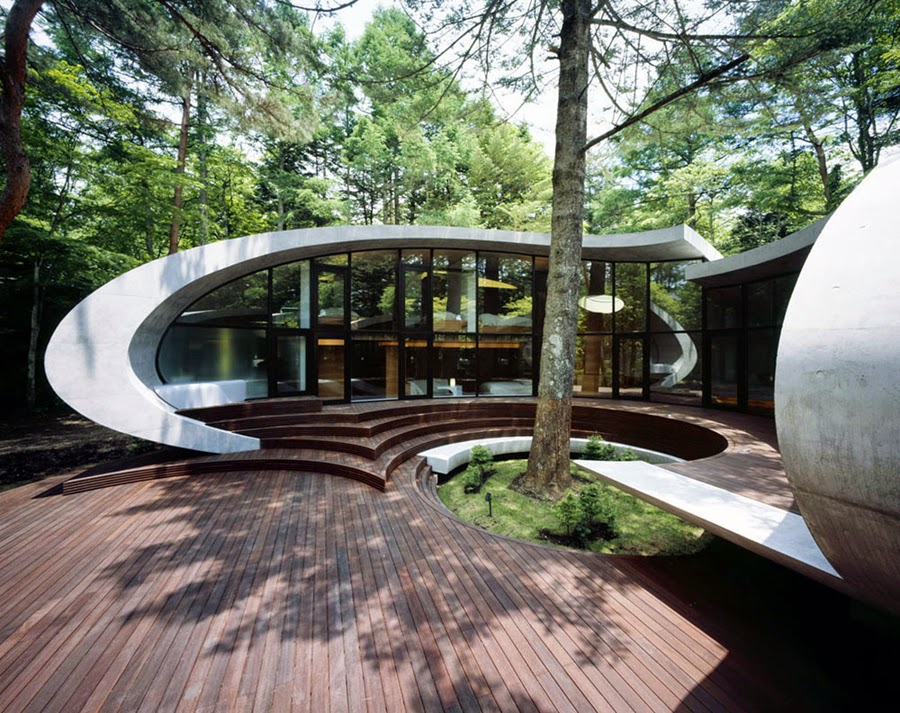 The “Shell Residence” in Karuizawa, Nagano (Japan) was designed by architect Kotaro Ide (ARTechnic JP)
and finished in 2008. Although the two-story shell-shaped structure is
distinct from the surrounding caves and rocks and clearly not a part of
nature, its organic shape blends subtly with the surrounding forest.
Low temperatures and high humidity levels in Karuizawa present
problems for traditional construction methods, so the architect came up with a
reinforced concrete design which floats above the ground. A small
amphitheater-like area has been created in the center of the house
to accommodate an old-growth tree. Large double glazed openings allow
for uninterrupted views, and the interior walls are curved to follow the
exterior form of the house; features and furniture have been
custom-made.
The floor heating system minimizes the loss of heat
from within the house, and assists in creating large interior spaces by
blocking drafts. 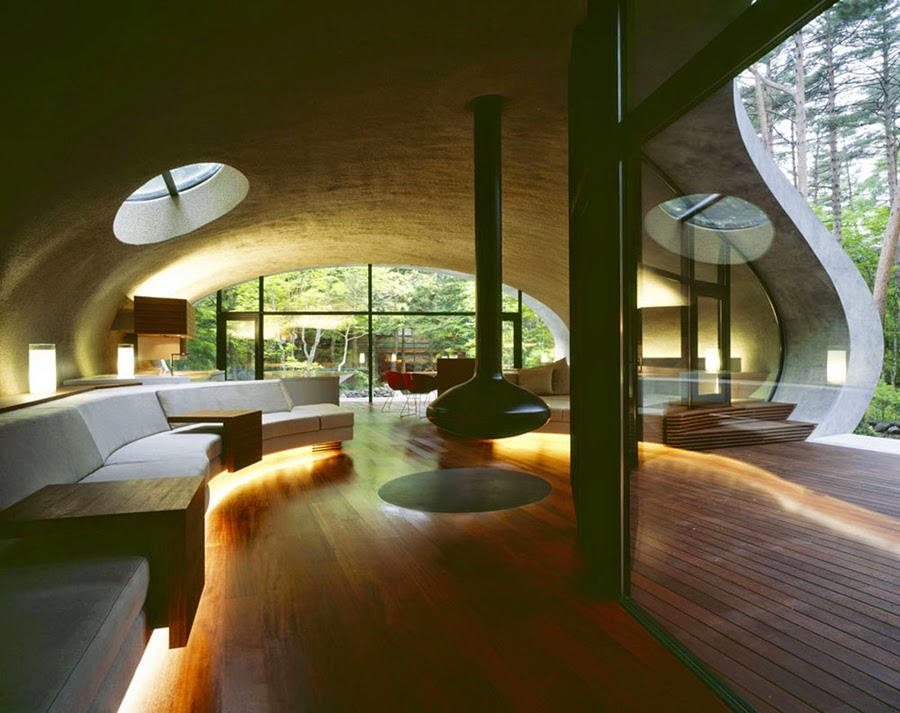 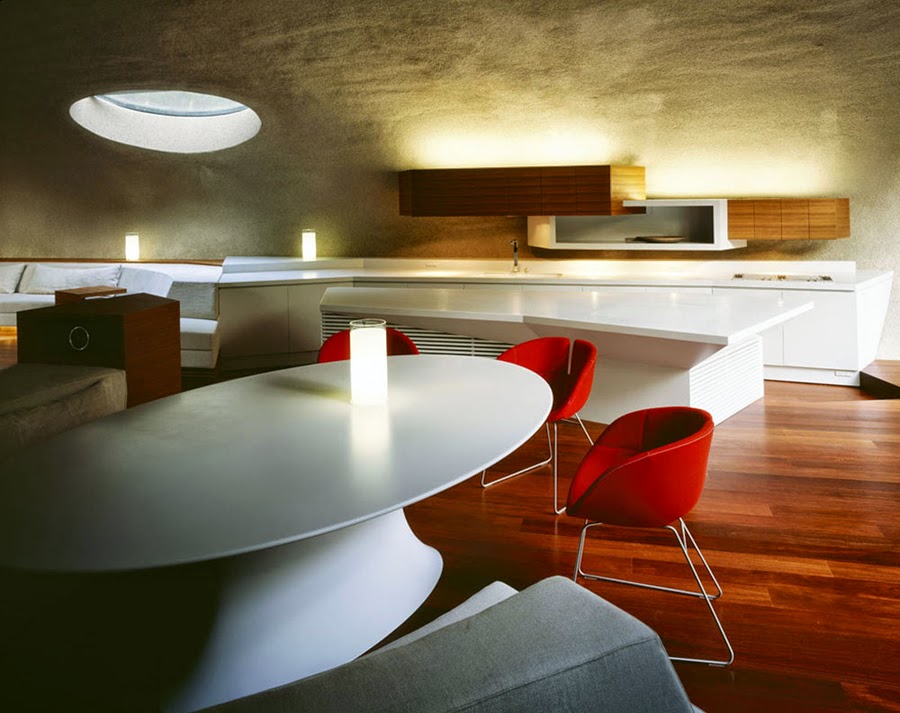 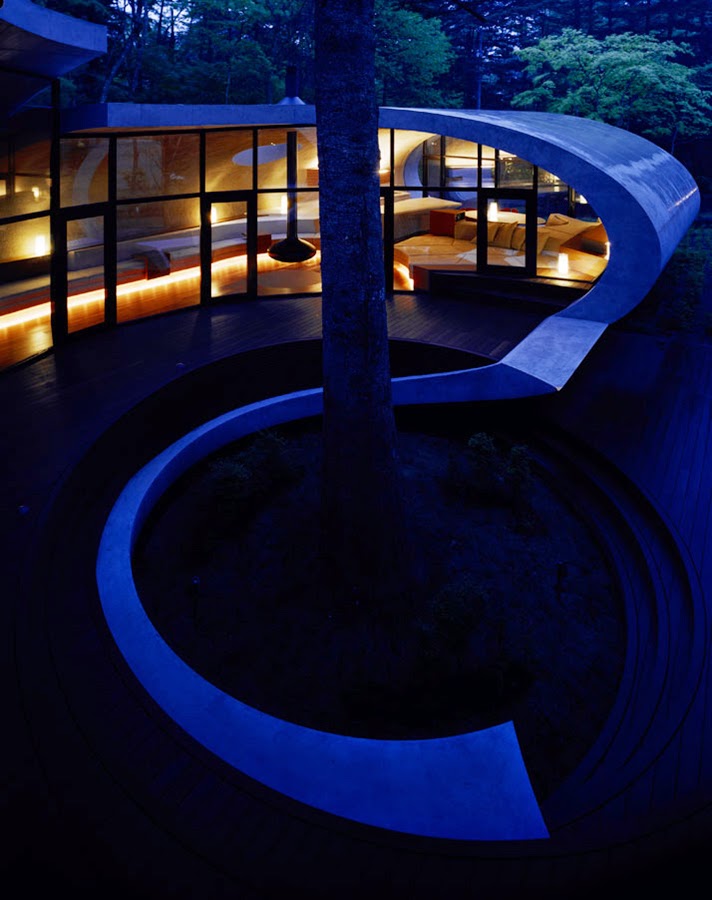 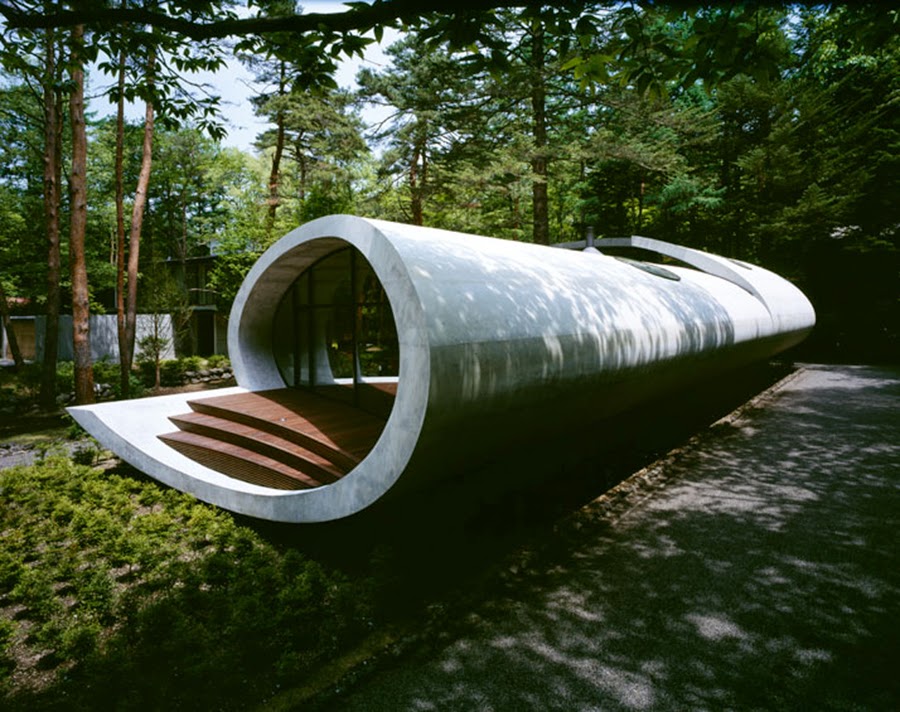 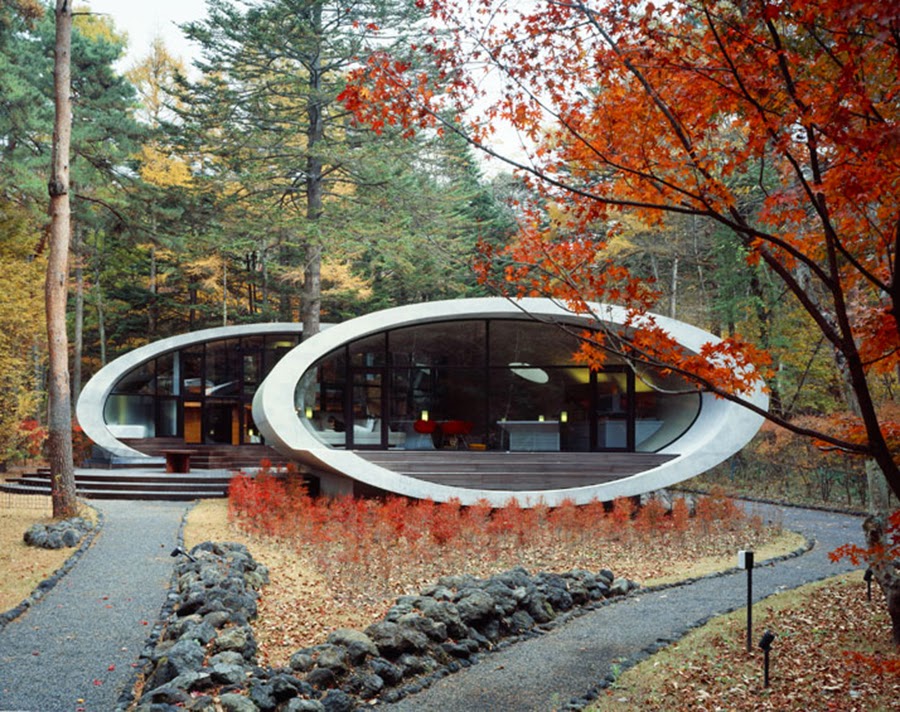 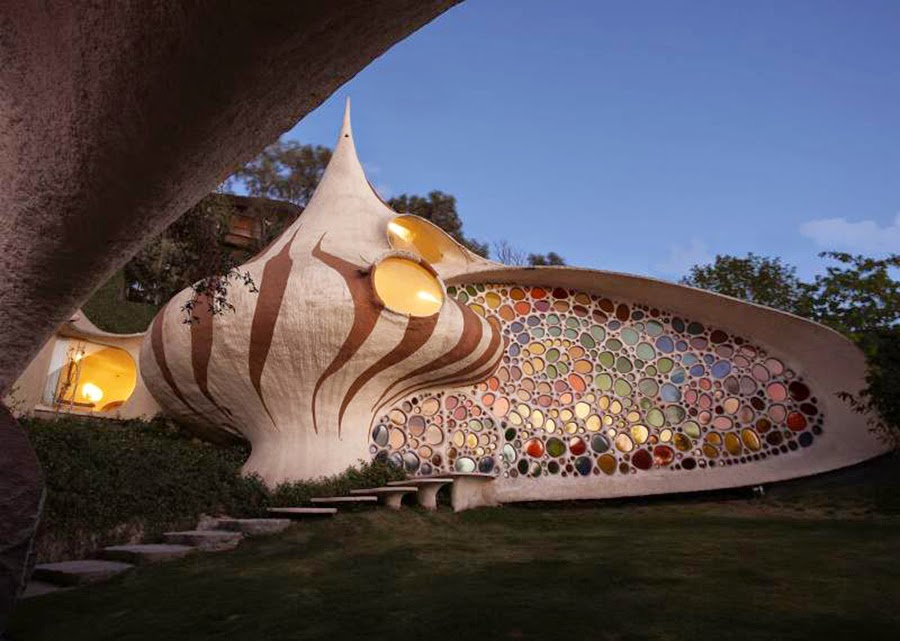 Javier Senosiain (Senosiain Arquitectos) is a celebrated Mexican
architect whose work is considered both pioneering and controversial. The Nautilus House was built in 2006 and is designed to be earthquake-proof and
maintenance-free; Senosian’s use of simple  ferrocement construction on frames of steel-enforced
chicken wire allows for rounded, natural
curves and an interior graced by spirals, circles and organically shaped
rooms that mimic the concave chambers one would expect inside a giant
mollusk. Hundreds of small rainbow-colored stained-glass windows line
spaces of ceiling and walls alike, sunning lush interior plant beds surrounding
flower-shaped couches. 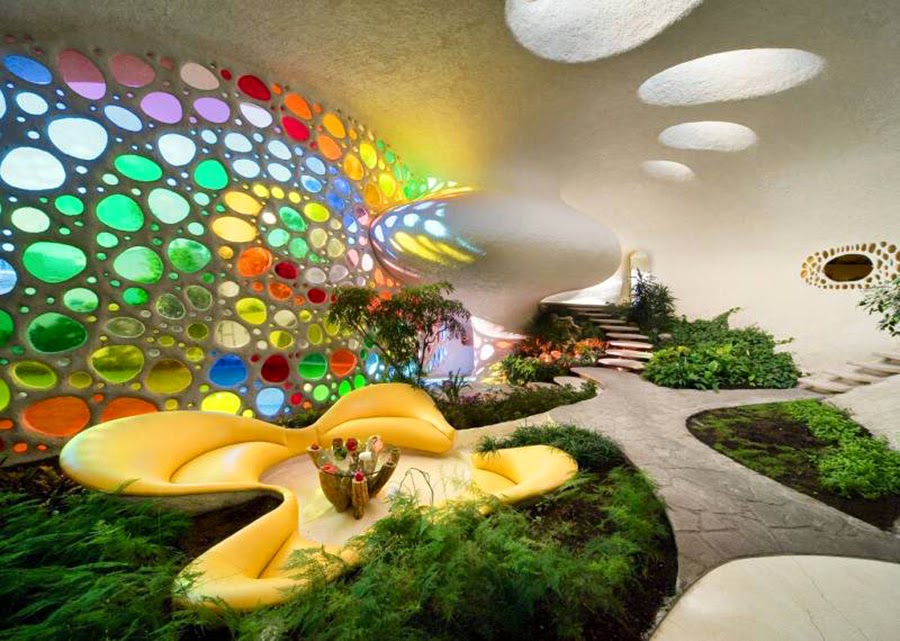 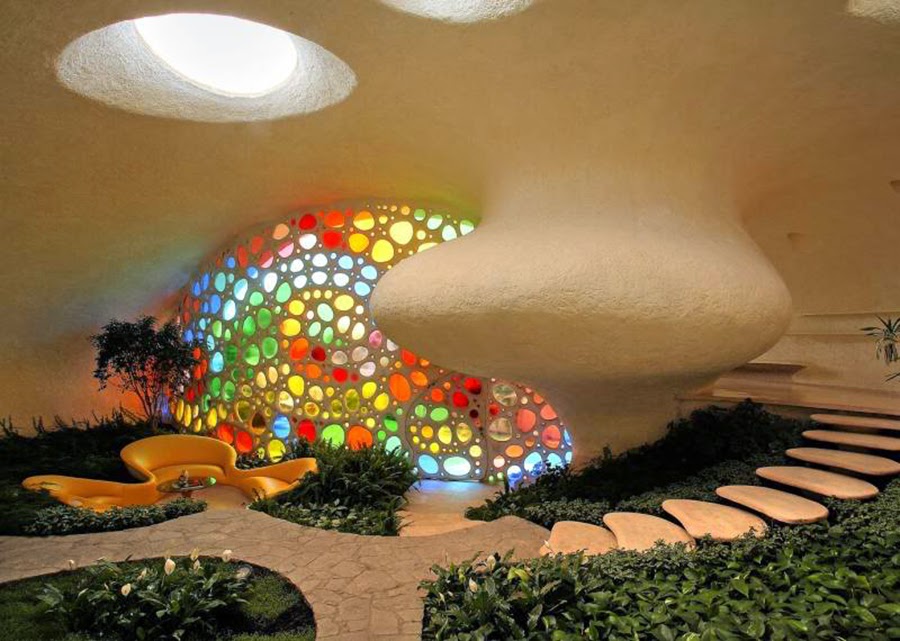 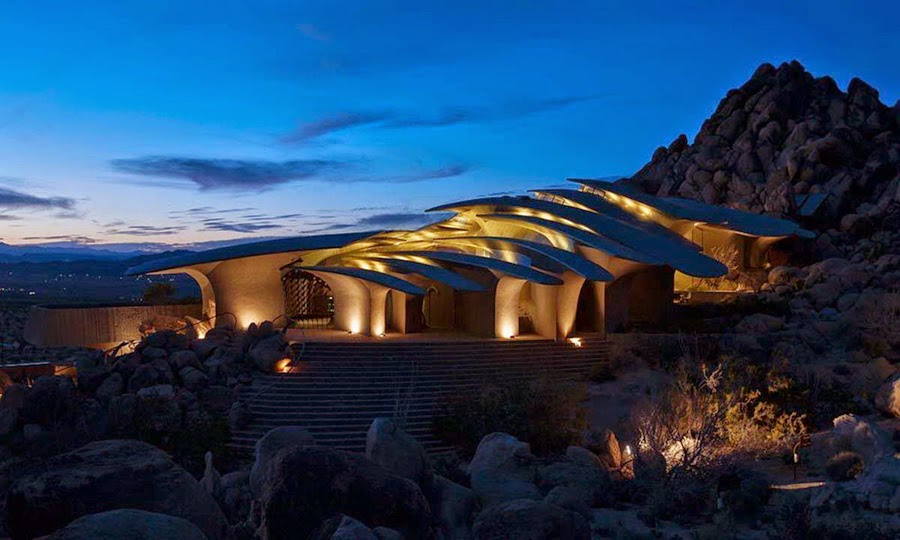 Inspired by the works of Frank Lloyd Wright, Kendrick Bangs Kellog’s High Desert House was designed for thermal energy gains. The residence is both surreal and contemporary; an effect accomplished by 26 curved “wings” of concrete, some spanning 50 feet, anchored in cantilevered concrete platforms. These elements are separated by generous expanses of glass to allow for any movement caused by the area’s innate seismic activity; the San Andreas Fault is only 15 miles away
The home’s interior woodwork and metal fixtures were all custom crafted by artist and metalworker John Voggeren, with much of it conceived and fabricated on-site. Living quarters are located on the brighter upper level, with semi-circular bedrooms about 20 feet in diameter. 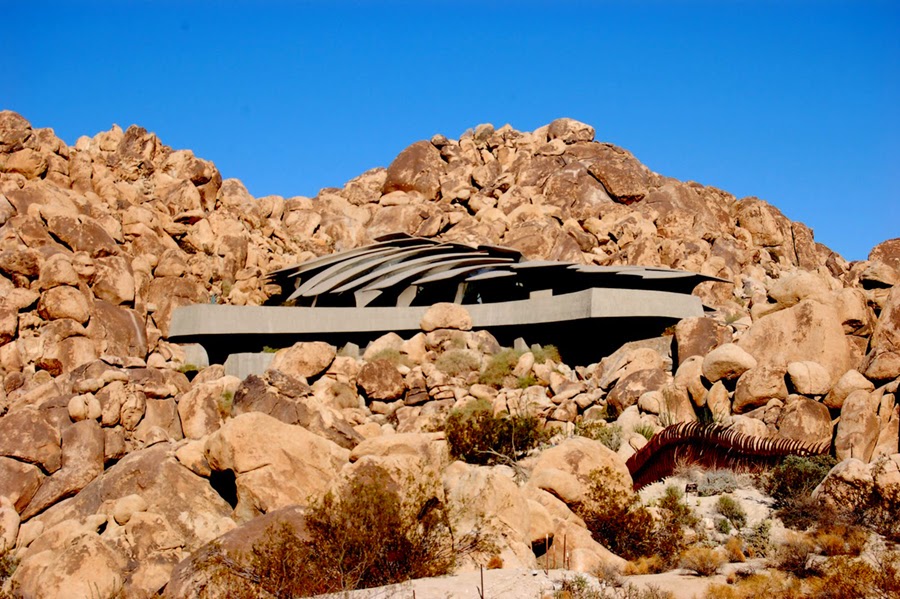 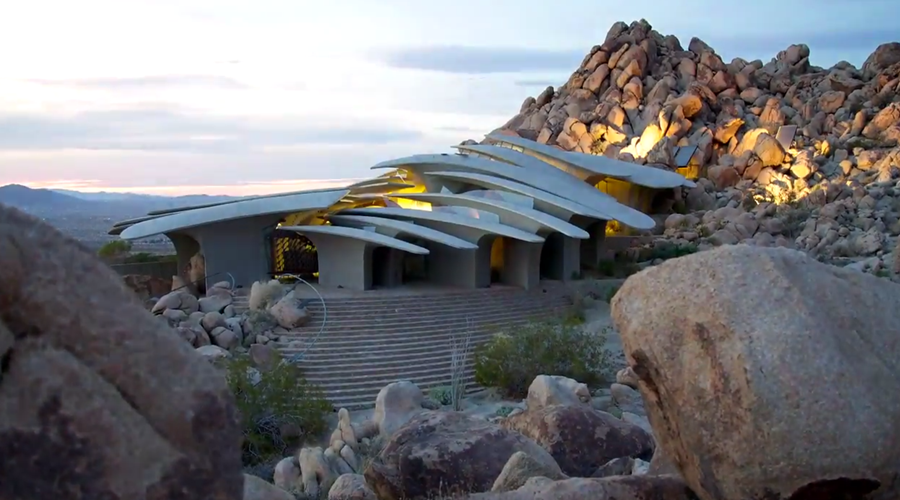 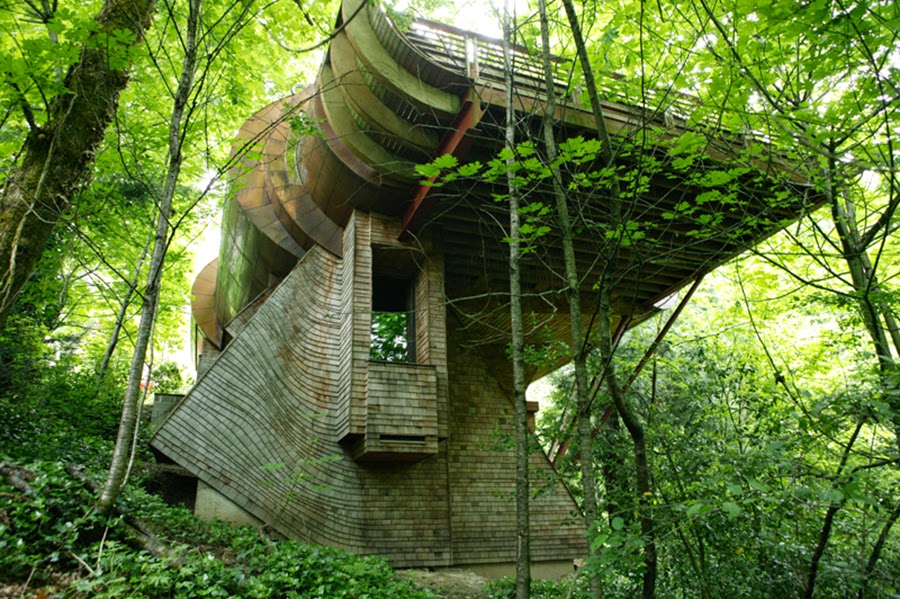 Portland based architect Robert Oshatz’s ‘Wilkinson Residence’ is located on a steep slope in a heavily wooded area; the main living space is placed in the tree canopy and contains the kitchen, dining room and a gathering area. The building features built in fixtures and fireplaces, all accented by curving natural wood beams, copper-plated frames and large glass walls that use the exterior foliage as a screen from direct sunlight. A large exterior deck brings the residents in direct contact with the treescape.
The lower floor is characterized by cedar shingles covering all external surfaces, and contains three bedrooms and a bathroom. Although a darker space, it is a more private area where views to the lower parts of the forest are framed by the deep fins between the windows.
The palette of materials blends between
exterior and interior, creating a balanced structure in harmony with the natural surroundings. Special attention was given to the sustainable features of the construction; plenty of ventilation and radiant heating maintain a comfortable internal temperature and air quality, with low-E glass reflecting direct sunlight. The owners are engulfed by the Douglas firs, maples, and alders in a house consistent with the rhythms of the forest. 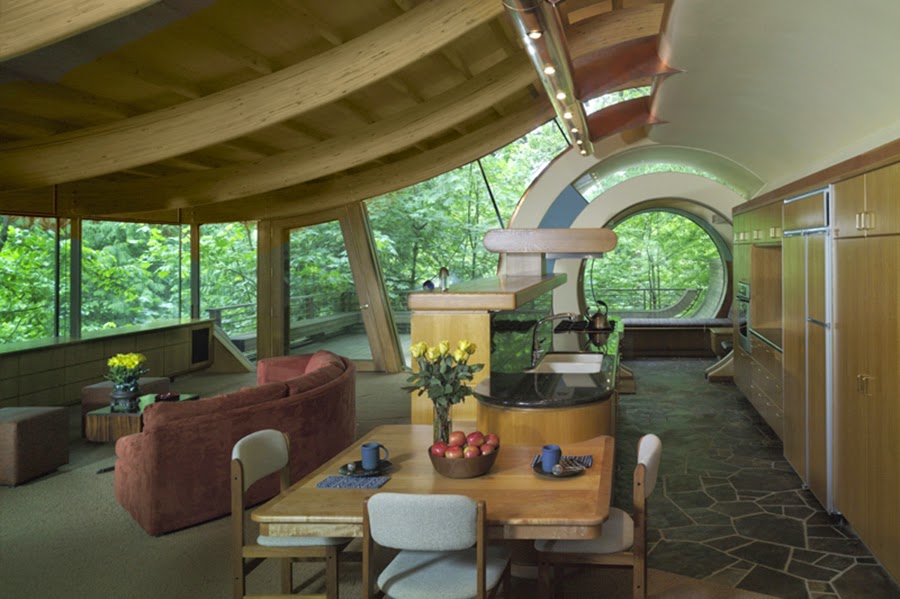 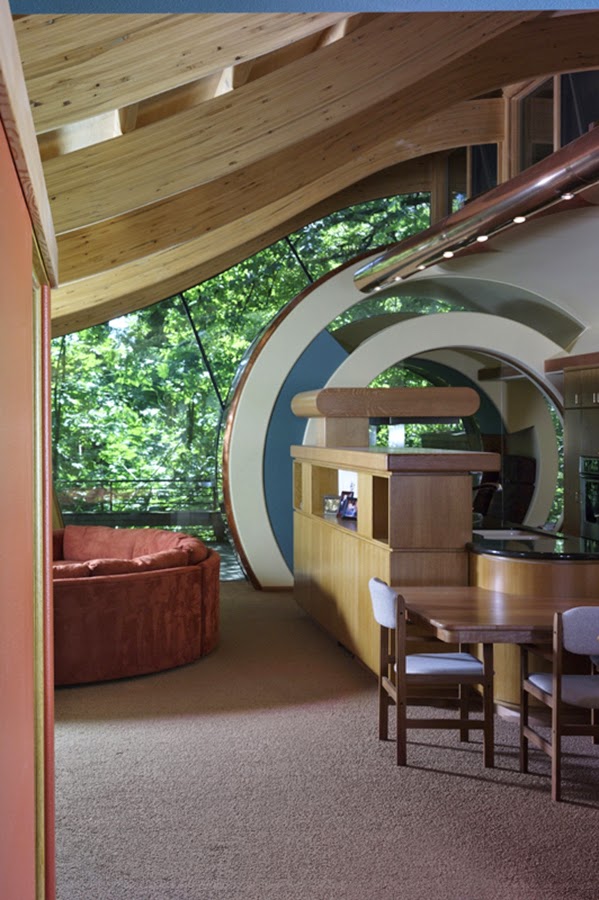 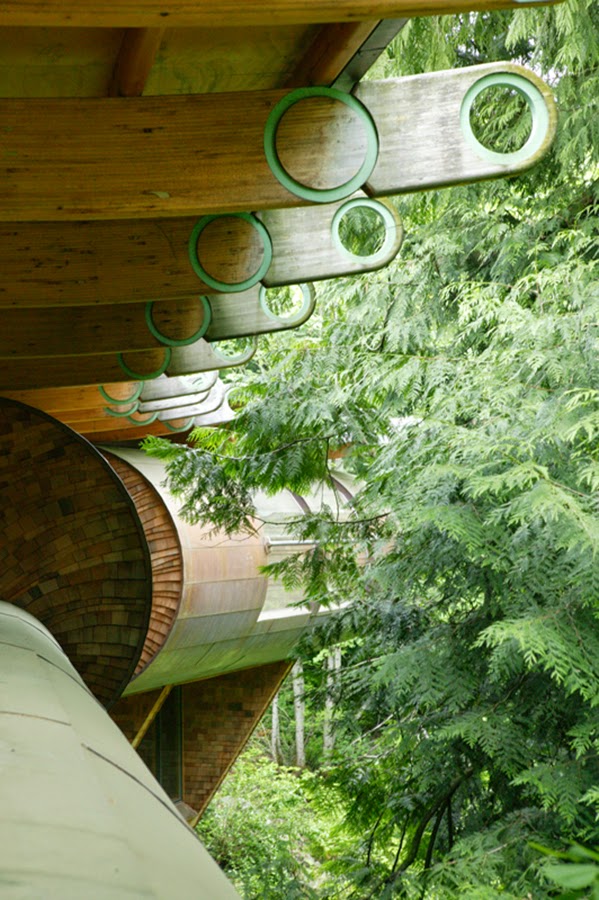 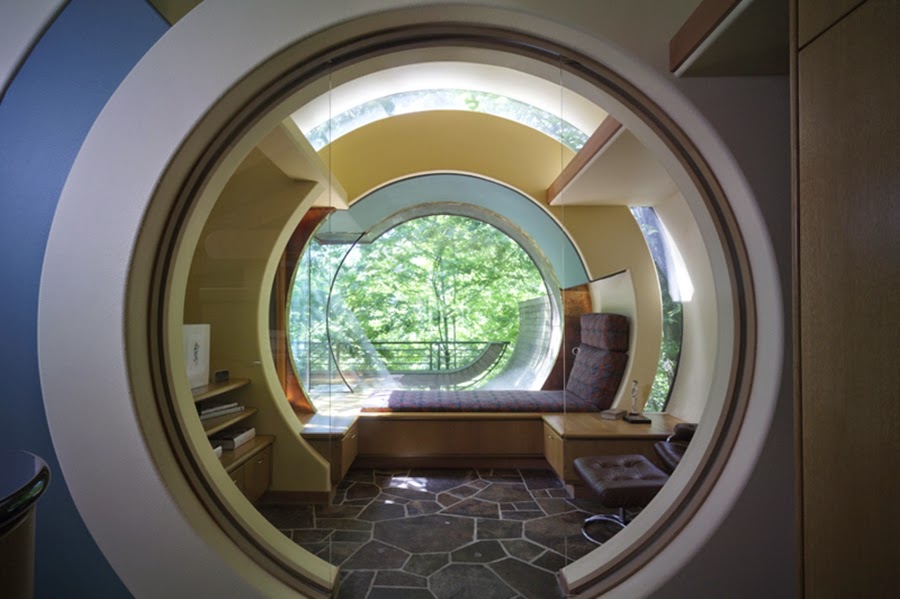 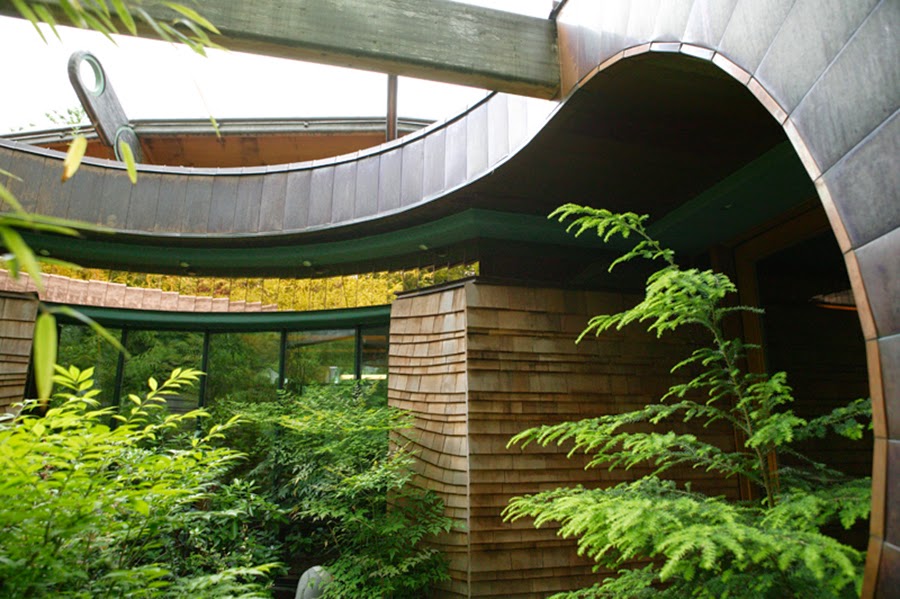 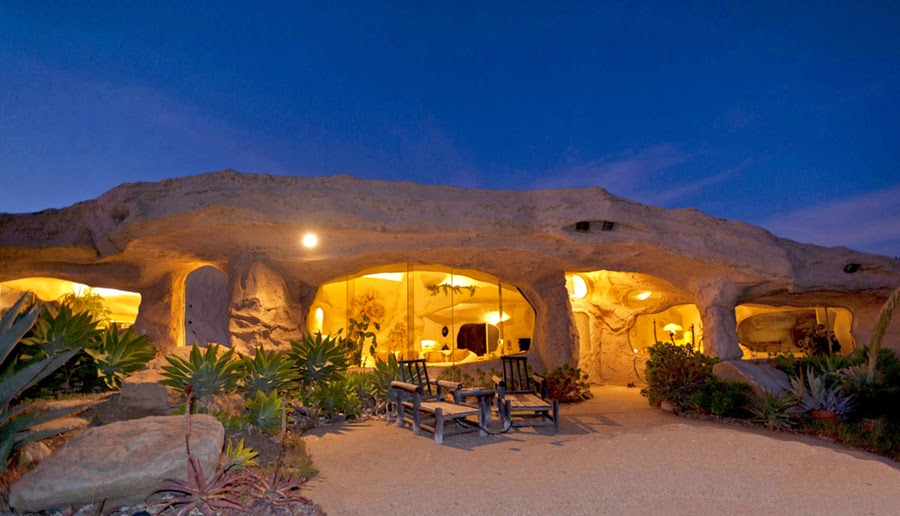 Designed for television star Dick Clark, Phillip Jon Brown’s unique, one-bedroom residential design sits on a nearly 23-acre property on top of a mountain overlooking the Pacific Ocean and the lights of Los Angeles. The architecture was dictated by circumstance; the Santa Monica Mountains National Recreational Area initially objected to the home being built on property that sits adjacent to an open space. Brown came up with the concept of creating a house that looked like a rock formation, and the park conservancy accepted it.
A small but open design living space features only one bedroom and two
bathrooms, but it’s showcasing a rustic fireplace and several large glass windows. The construction utilized light materials combined with concrete; interior walls are wood and the ceilings consist of
steel beams covered with concrete, defined by irregular shapes and natural stone colors. 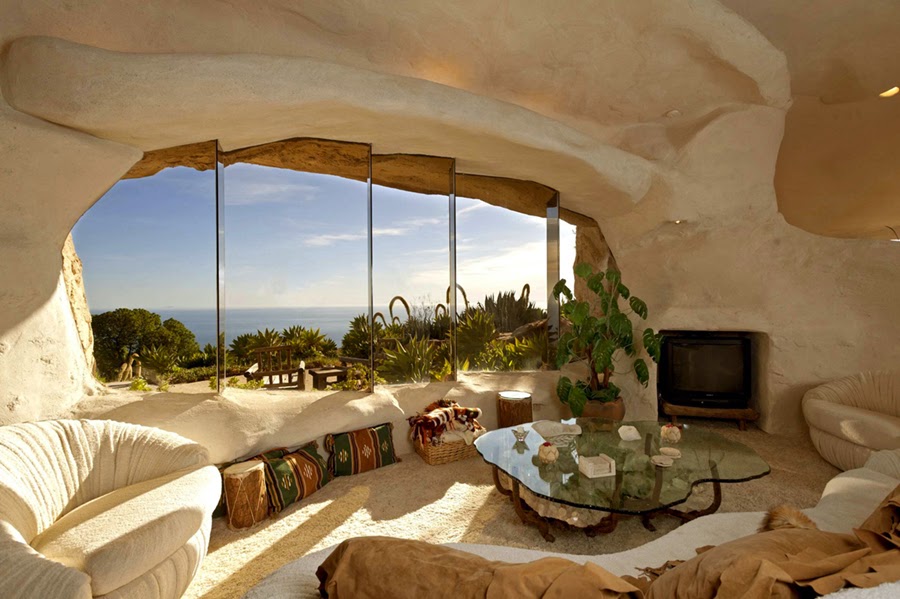 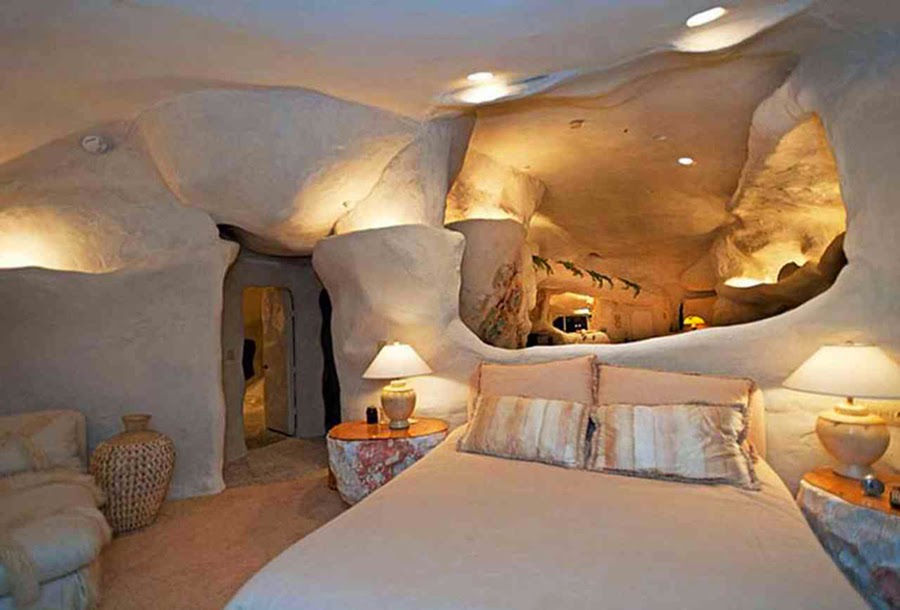