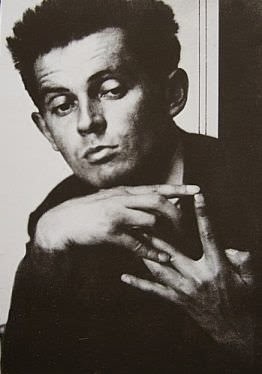 Egon Schiele (1890-1918) was born in 1890 in Tulln, Lower Austria. His father, Adolf Schiele, was the station master of the Tulln station in the Austrian State Railways; as a child Schiele was fascinated by trains, and would spend many hours drawing them. To those around him, Schiele was regarded as a strange child. Shy and reserved, he did poorly at school except in athletics and drawing, and was usually in classes made up of younger pupils.

When Schiele was 15 his father died from syphilis; he became a ward of his maternal uncle Leopold Czihaczec, also a railway official. Although distressed at Schiele’s lack of interest in academia, he recognized his nephew’s talent for drawing and hired the artist Ludwig Karl Strauch as a tutor. In 1906 Schiele applied at the Kunstgewerbeschule (School of Arts and Crafts) in Vienna, where Gustav Klimt had once studied; at the insistence of several faculty members he was sent on to the more traditional Akademie der Bildenden Künste within his first year. Unfortunately his main teacher exhibited a strict doctrine and ultra-conservative style which frustrated and dissatisfied Schiele so badly that he left three years later.

In 1907 Schiele sought out and met Gustav Klimt who took a particular interest in the gifted young artist. 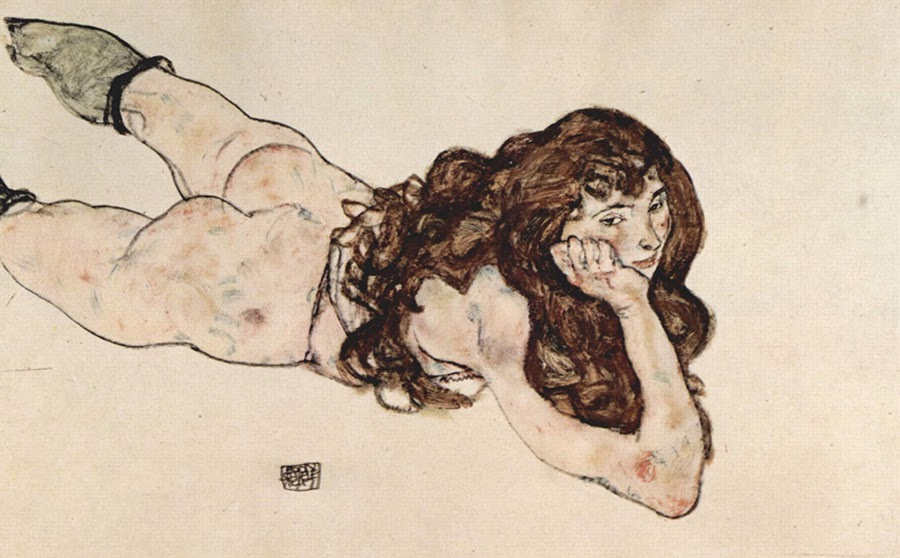 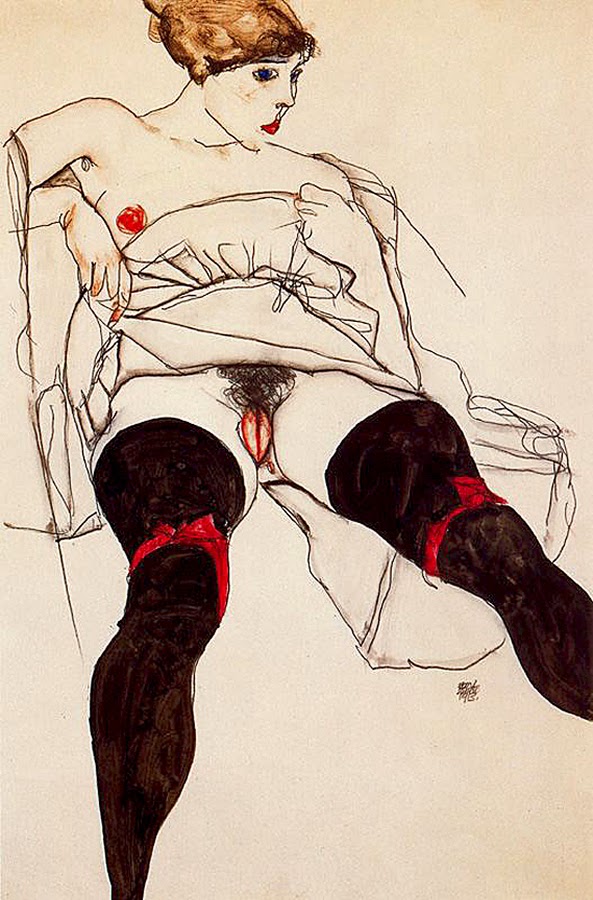 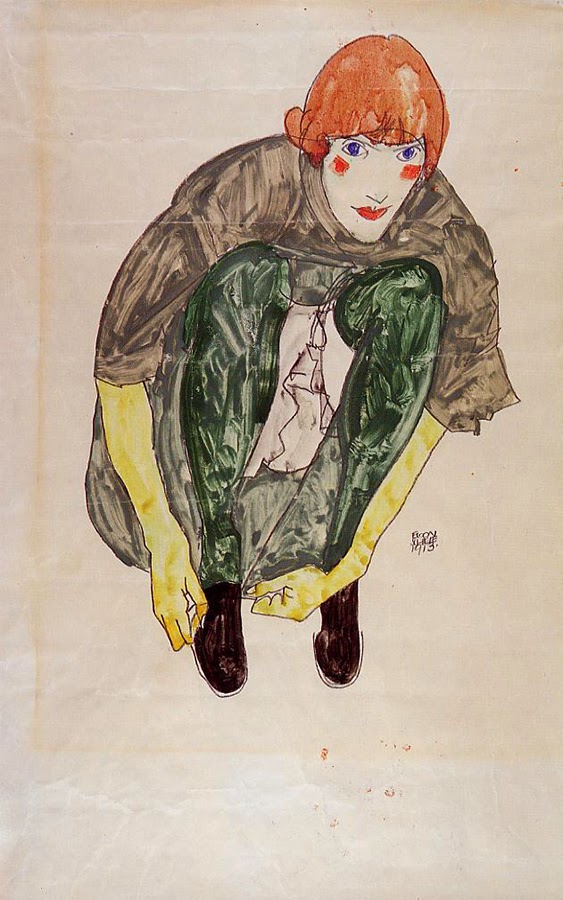 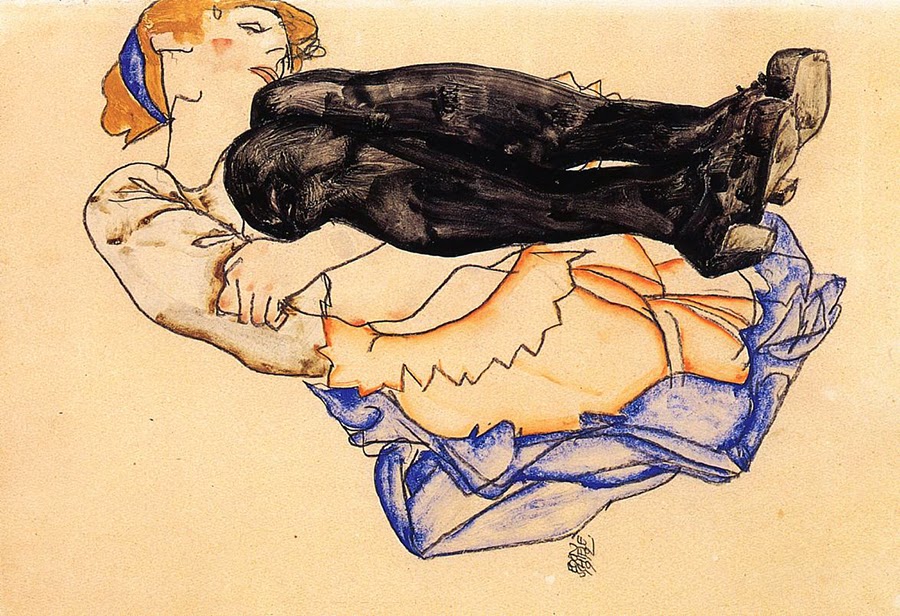 Klimt bought several of Schiele’s drawings and assisted in arranging models for him and providing introductions to potential patrons. Klimt also introduced Schiele to the Wiener Werkstätte, the arts and crafts workshop connected with the Secession. In 1908 Schiele had his first exhibition in Klosterneuburg.

Klimt invited Schiele to exhibit some of his work at the 1909 Vienna Kunstschau alongside the work of Edvard Munch, Jan Toorop, and Vincent van Gogh among others. 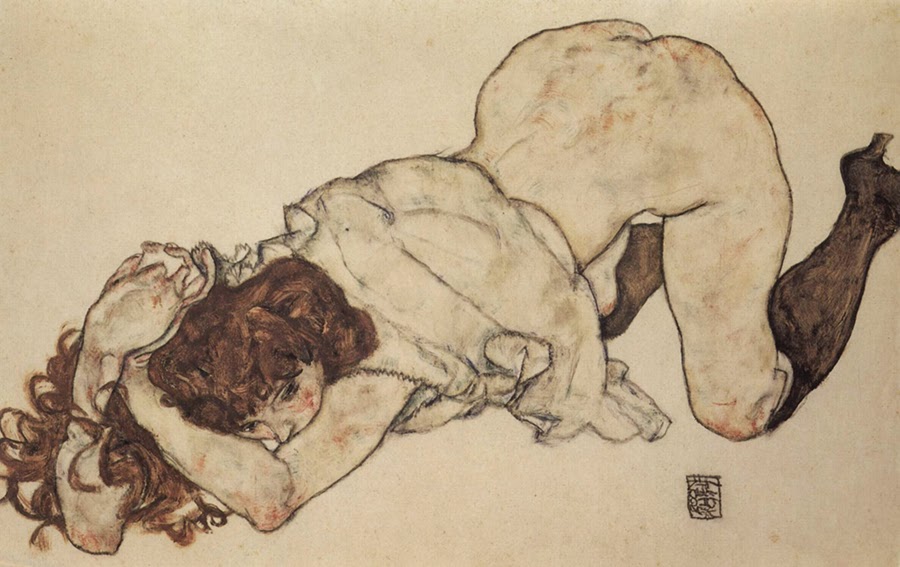 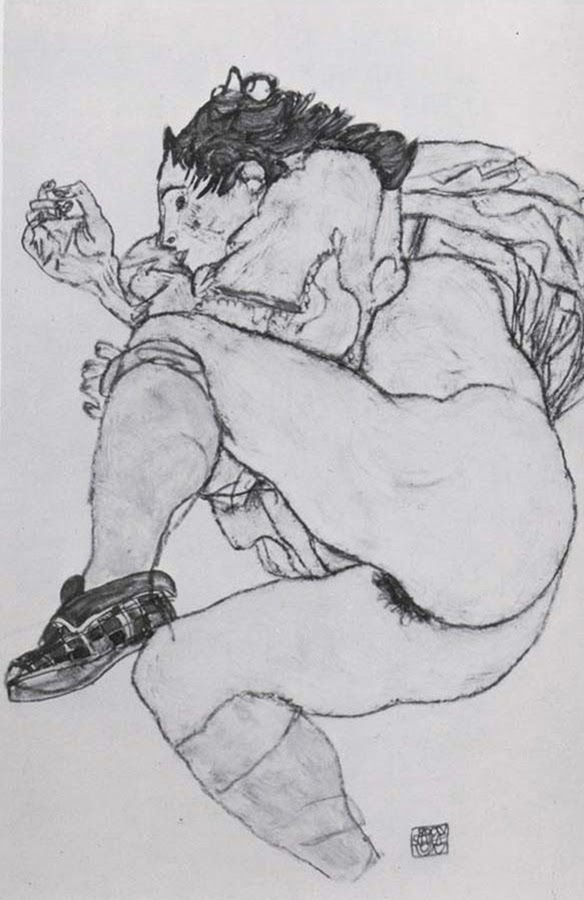 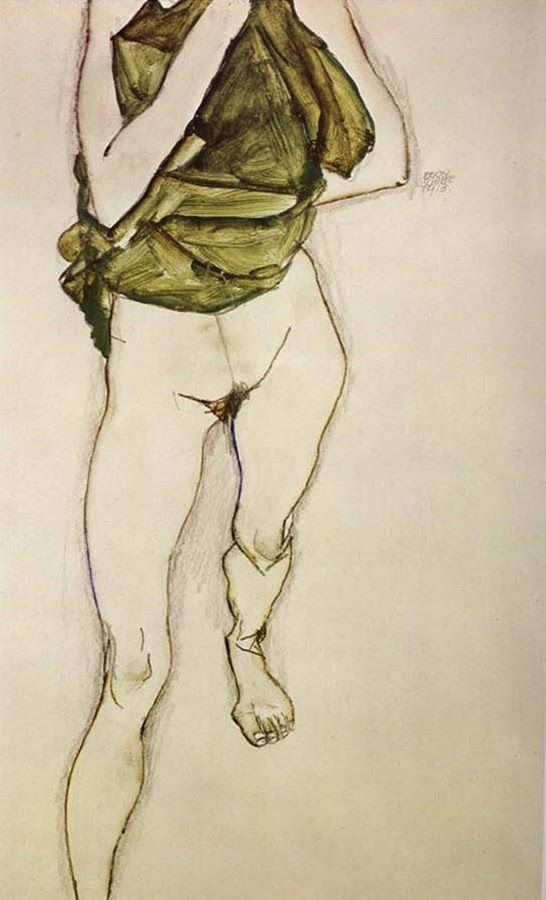 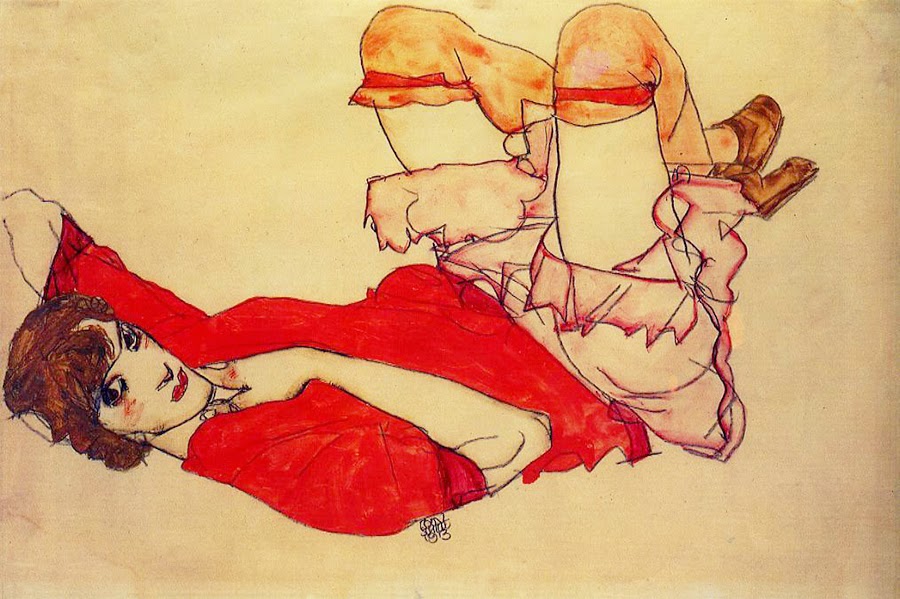 Now free of the constraints of the Academy’s conventions, Schiele had begun to explore erotica and many found the explicitness of his works disturbing. Despite this (or perhaps because of it) he was invited to participate in numerous group exhibitions including those of the Neukunstgruppe in Prague in 1910 and Budapest in 1912; the Sonderbund, Cologne, in 1912; and several Secessionist shows in Munich beginning in 1911. 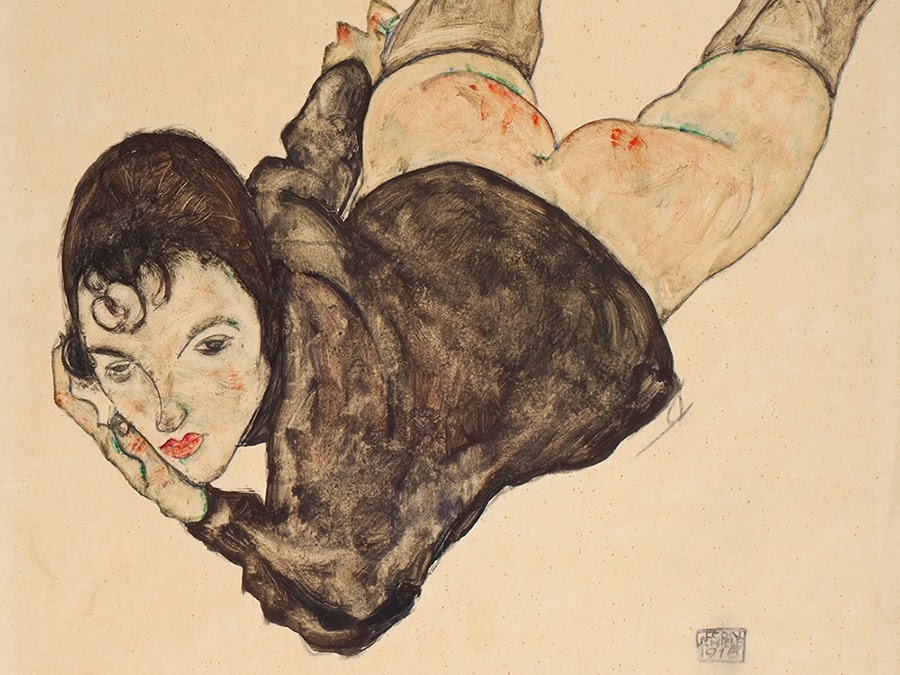 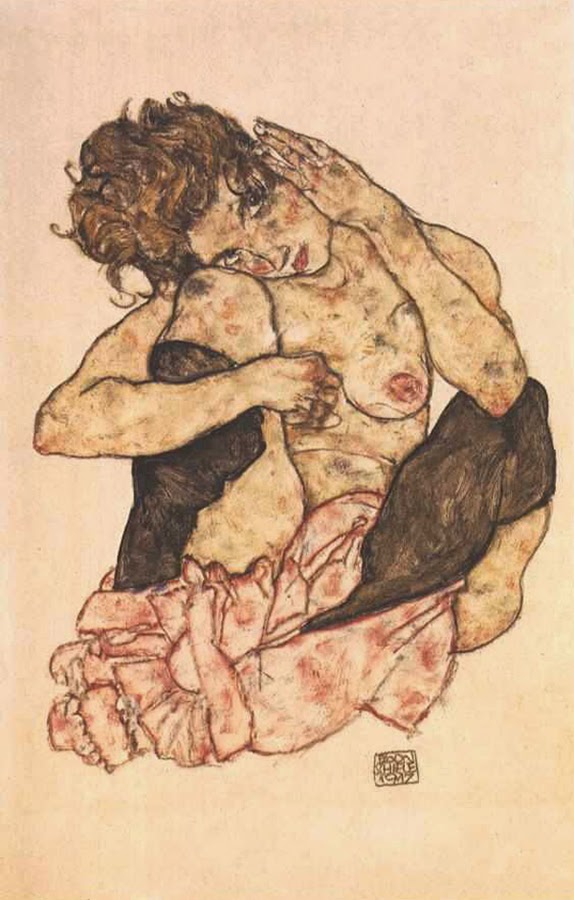 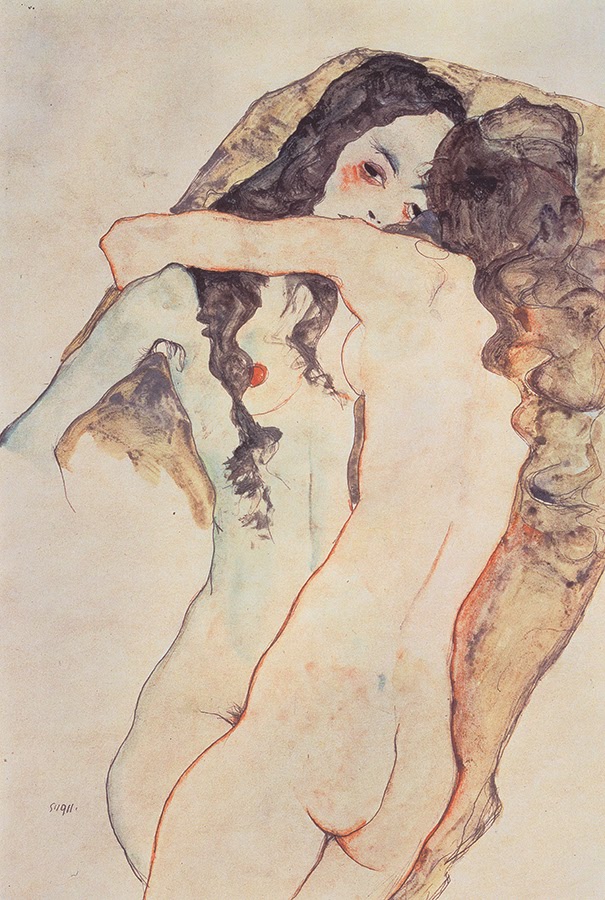 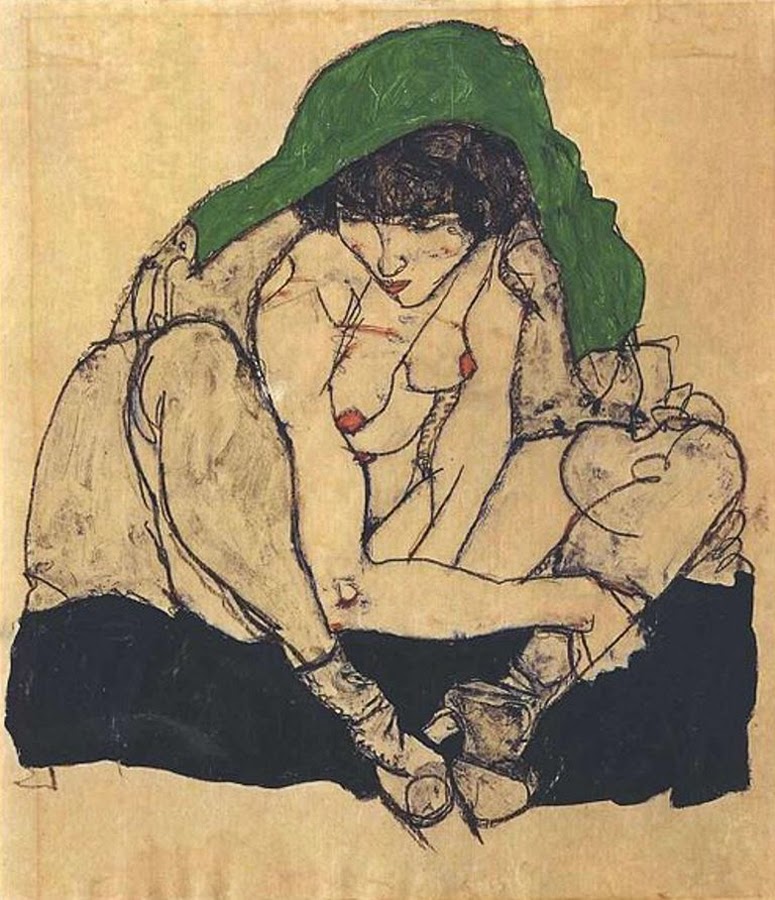 In 1911 at age 21 Schiele met the seventeen-year-old Walburga (Wally) Neuzil, who lived with him in Vienna and served as a model for some of his most striking paintings. Very little is known of her except that she had previously modelled for Gustav Klimt and may have been one of his mistresses. Schiele and Wally moved to the small town of Český Krumlov (Krumau) in southern Bohemia, the birthplace of Schiele’s mother; today it is the site of a museum dedicated to Schiele. But despite family connections in Krumau the provincial villagers were, as it turns out, hardly impressed with
Schiele’s bizarre manner of dressing and unconventional life style. In August 1911 he was evicted
from his lodgings and forced to leave town
after a nude model was observed posing outdoors. 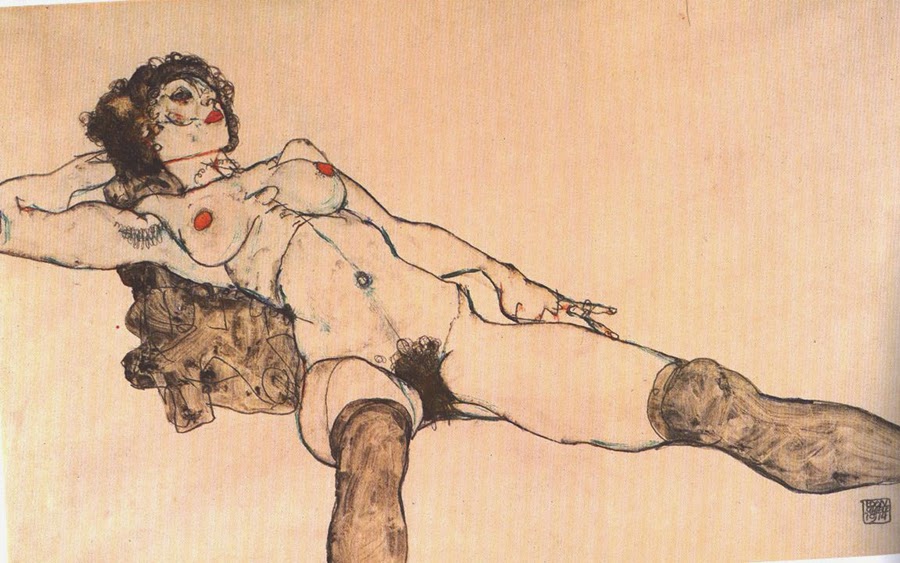 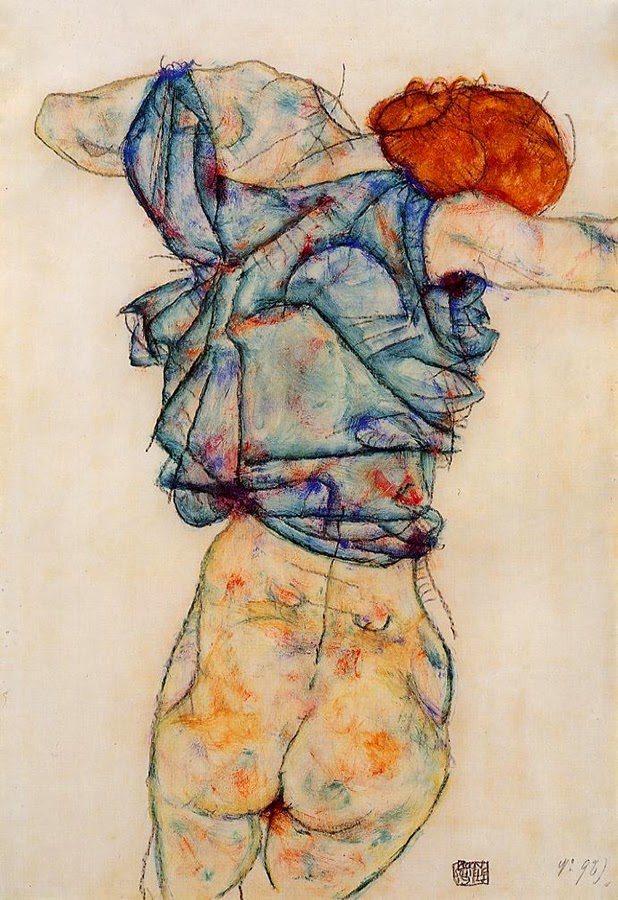 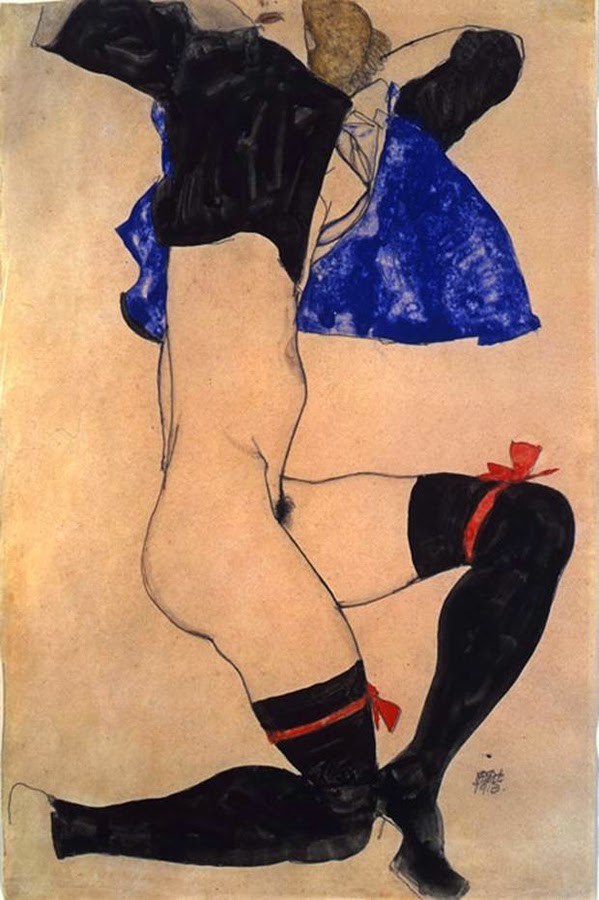 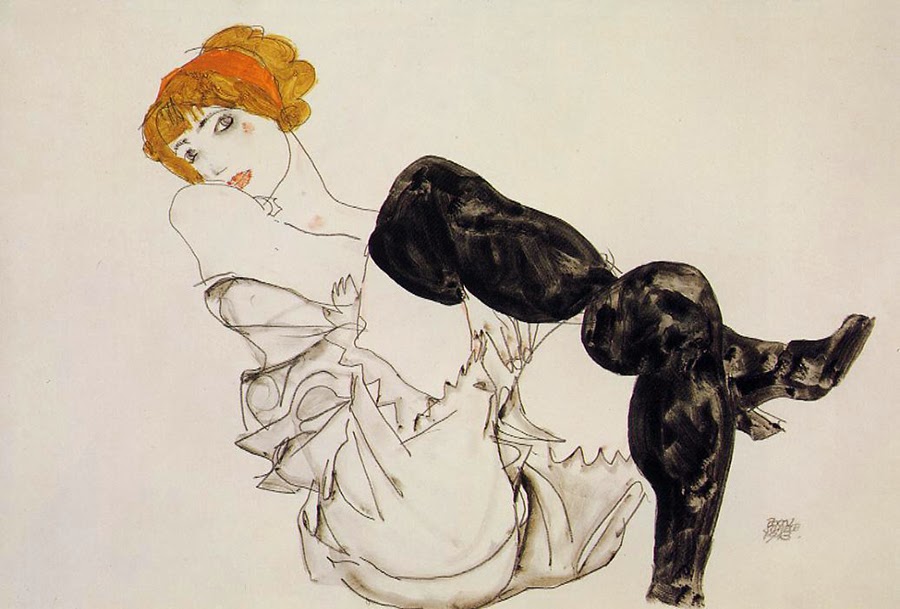 The couple then moved to Neulengbach, 35 km west of Vienna. Teenagers clearly found the painter – who in many ways still
thought and acted like a child himself – a romantic and appealing figure, and Schiele’s studio became a gathering place for Neulengbach’s delinquent children. On April 1912 he was arrested for seducing a young girl below the age of consent; Tatjana Georgette Anna von Mossig had decided to run away from
home and sought refuge with Egon and Wally.
The couple, not knowing how to react, agreed to take the girl to her
grandmother in Vienna the next day, but when they arrived in the city
Tatjana had a change of heart and asked to return home. By the time her father came
to fetch her he had already filed charges of kidnapping and rape
against Schiele.
The police seized more than a hundred drawings which they considered pornographic. Schiele was imprisoned while awaiting his trial, but when his case was brought before a judge the charges of seduction and abduction were promptly dropped. The artist was still found guilty of “exhibiting erotic drawings in a place accessible to children”: twenty-one days already spent in custody were taken into account and he was sentenced to an additional three days’ imprisonment. 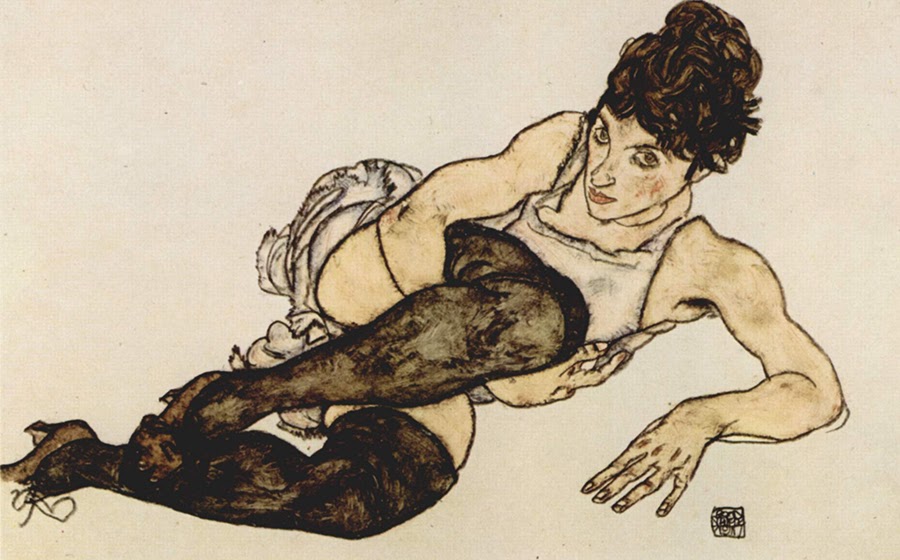 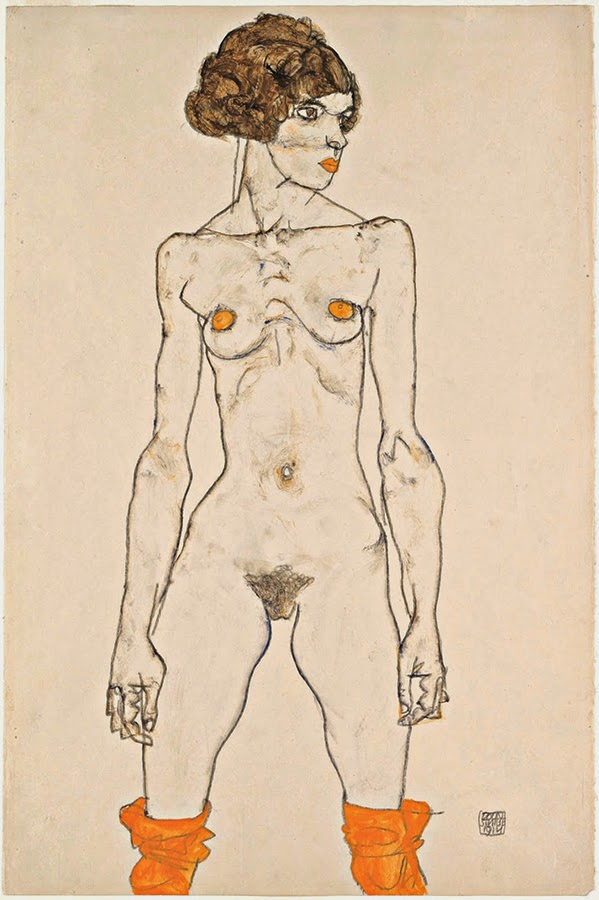 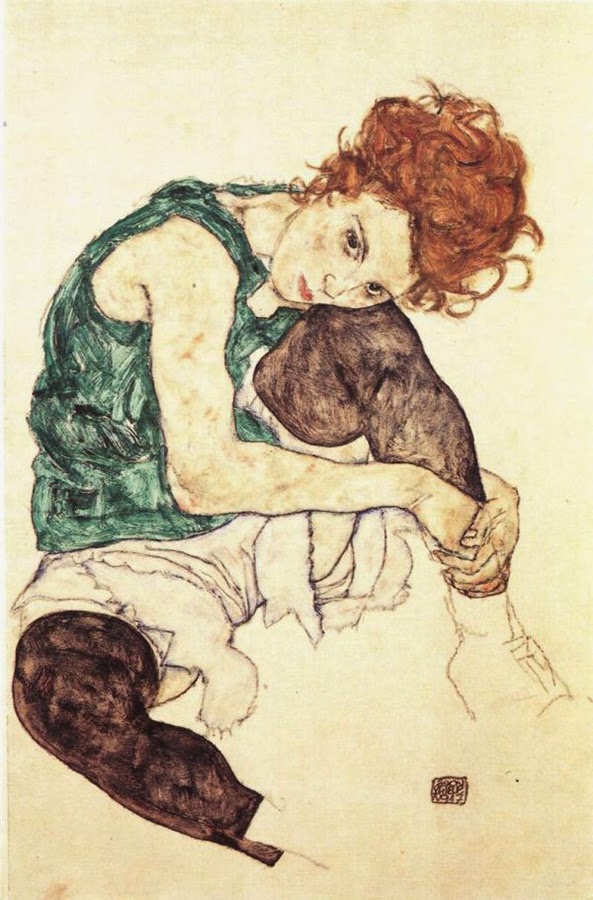 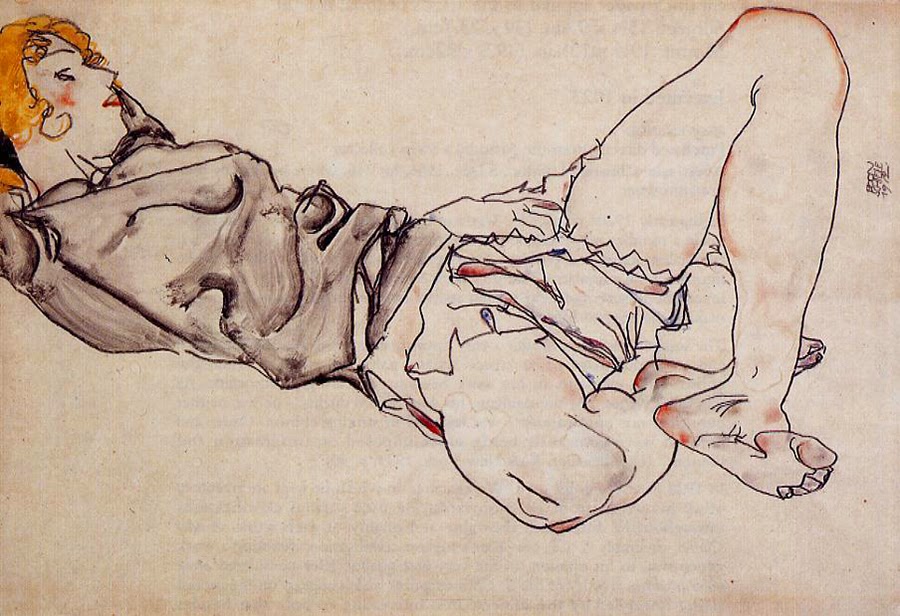 The twenty-four days that Schiele spent in jail formed a turning point
in his brief life. He was finally compelled to come to
terms with the demands that society places on everyone, including
artists; he made visible concessions to conventional
morality almost immediately.  In 1913 the Galerie Hans Goltz, Munich, mounted Schiele’s first solo
show. Another solo exhibition of his work took place in Paris in 1914.
In 1915 broke with Wally. He began creating large allegorical paintings which were not his best by any means, but his exhibitions were receiving
more favorable notice and he began to attract a new set of patrons,
including the wealthy Lederer family and generous collector Franz Hauer.
In his early twenties Schiele had explored his own ambivalence toward
and even terror of sexuality: he now approached the subject from a greater emotional distance.
His later nudes were increasingly depersonalized, but his portraits
were, conversely, more probing. Instead of projecting his own
personality onto that of his subjects, as he had formerly, he was now
intimately attuned to each individual’s identity. 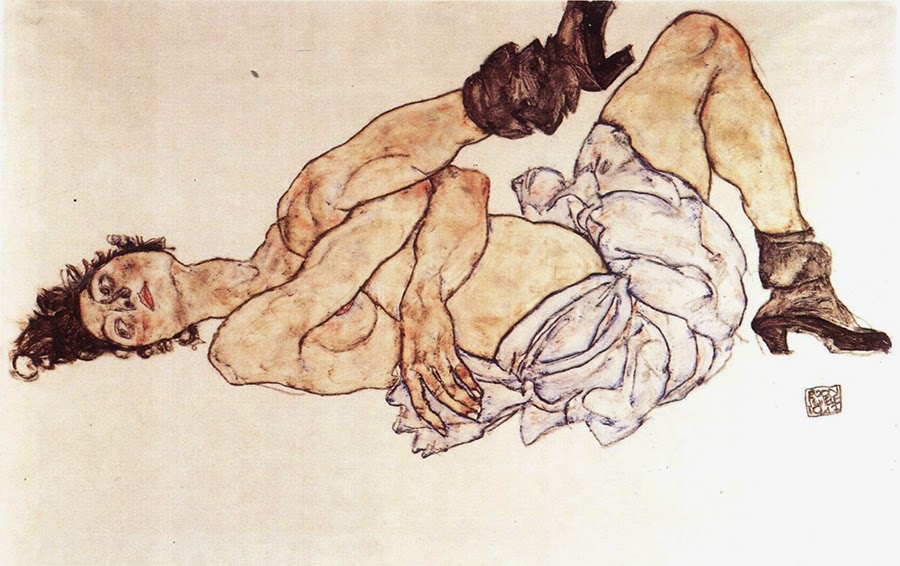 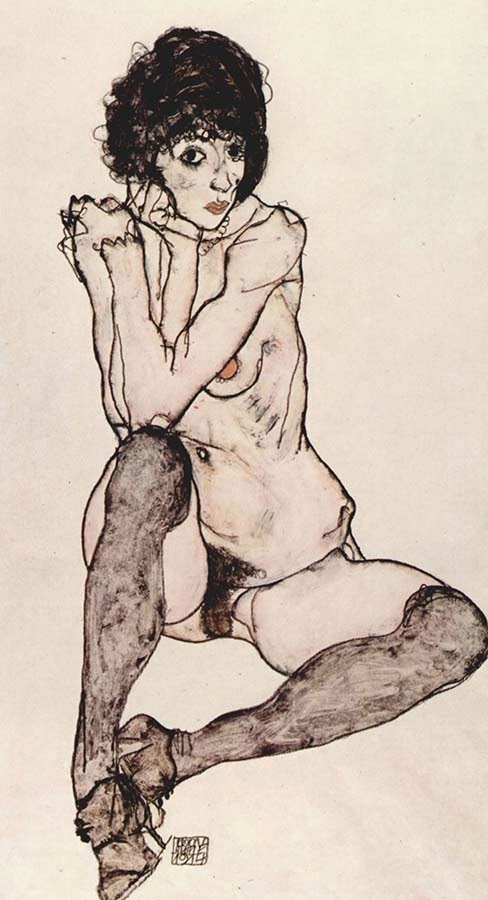 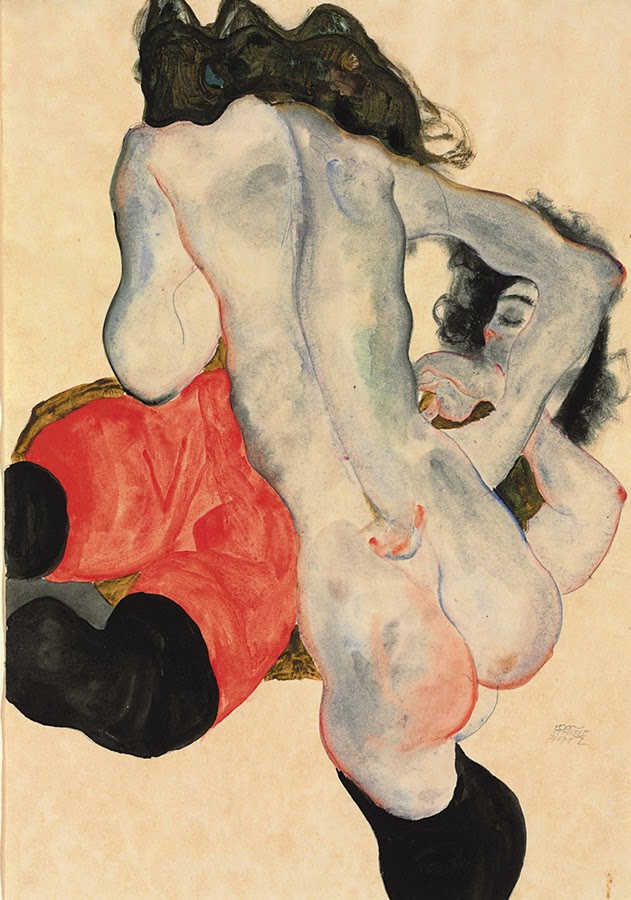 In 1915, Schiele married Edith Harms, who lived across the street from his studio in the Viennese suburb of Hietzing. Three days after his wedding Schiele was ordered to report for active service in the army where he was initially stationed in Prague. Despite his military service Schiele was still exhibiting in Berlin, and also had successful shows in Zürich, Prague, and Dresden. Because of his weak heart and his excellent handwriting, Schiele was eventually given a job as a clerk in a POW camp near the town of Mühling.

There he was allowed to draw and paint imprisoned Russian officers, and his commander, Karl Moser (who assumed that Schiele was a painter and decorator when he first met him), even gave him a disused store room to use as a studio. 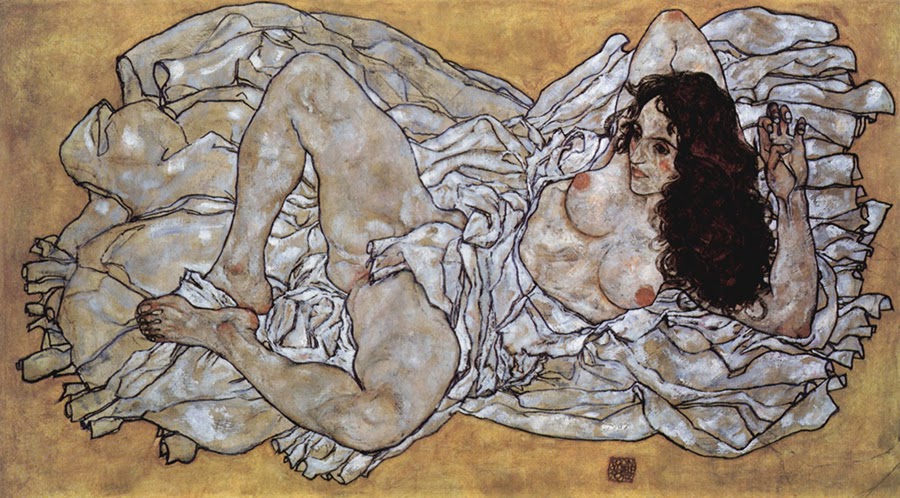 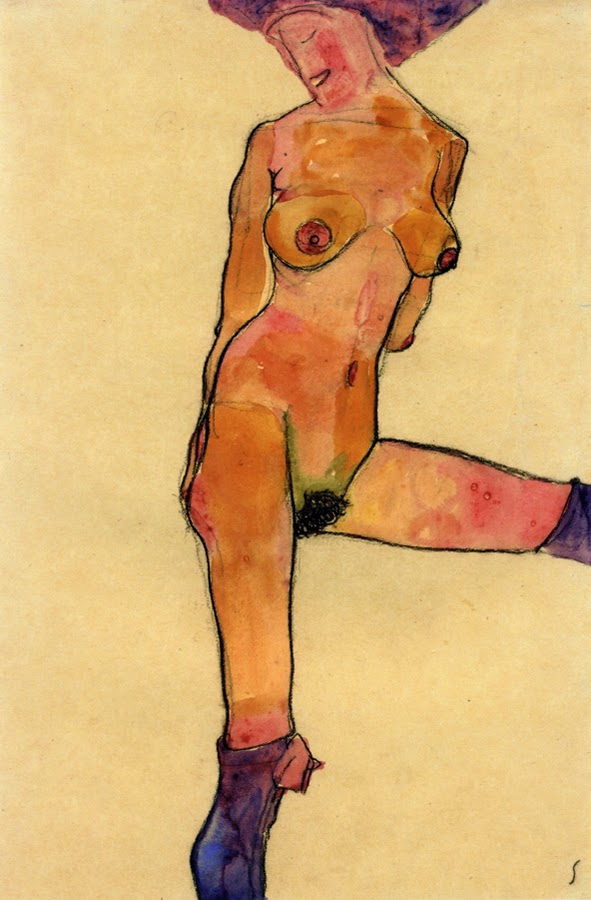 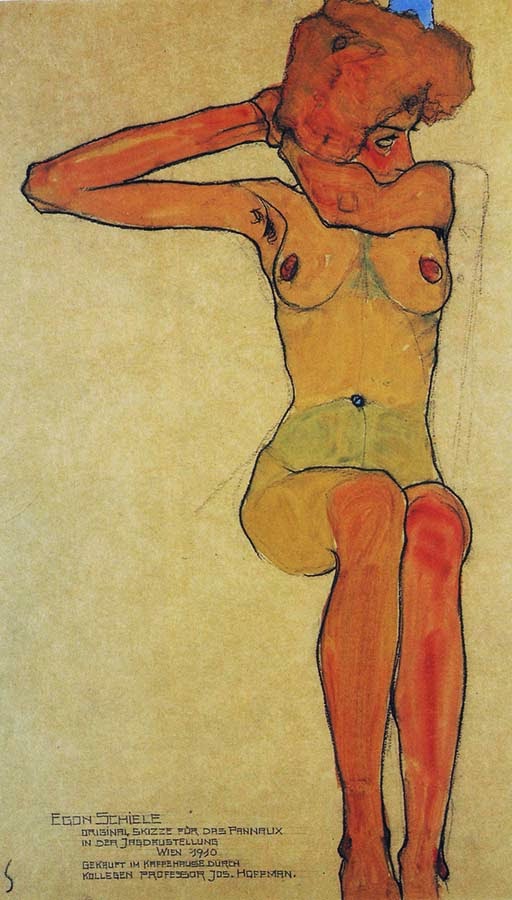 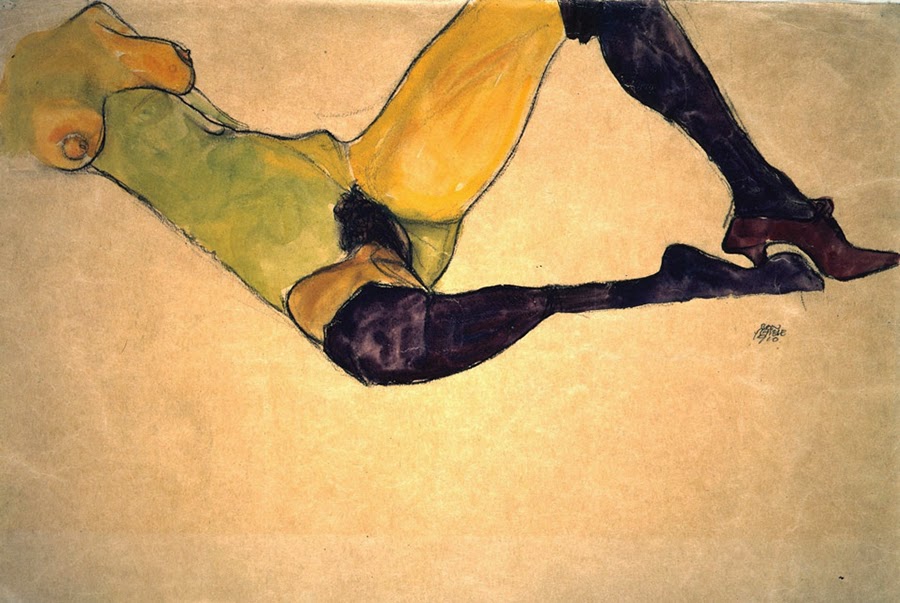 By 1917 he was back in Vienna and refocused on his artistic career. His output was prolific, and his work reflected the maturity of an artist in full command of his talents. He was invited to participate in the Secession’s 49th exhibition, held in Vienna in 1918. Schiele had fifty works accepted for this exhibition and they were displayed in the main hall. The show was a triumphant success; prices for Schiele’s drawings increased and he received many portrait commissions.
In the autumn of 1918 the Spanish flu
pandemic that claimed more than 20,000,000 lives in Europe reached
Vienna. Edith, who was six months pregnant, succumbed to the disease on
28 October.
Schiele died only three days after his wife. He was 28 years
old. During the three days between their deaths, Schiele drew a few
sketches of Edith; these were his last works. 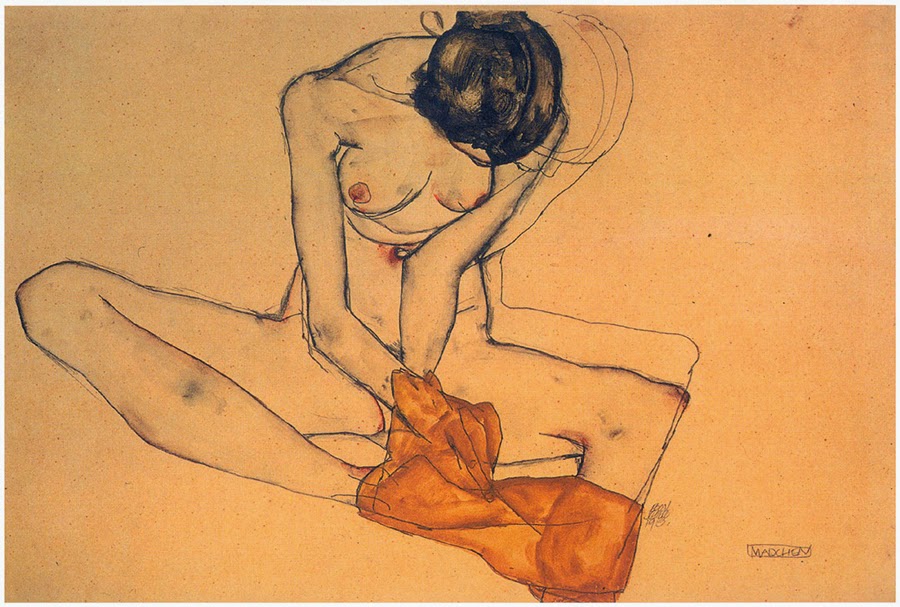