When Gilbert Shelton (Rip-Off Press) decided to produce a book of Robert Williams’ paintings in 1979, Williams decided to give it the self-deprecating title “The Lowbrow Art of Robt. Williams” (see my post on Williams at Flesh & Relics) since no authorized art institution would recognize his style. The name stuck, although he says he considers the movement more as “cartoon-tainted abstract surrealism.”
Todd Schorr – perhaps more than anyone else- has taken that insanity flavored football and run with it. Past the goal line, out of the stadium and quite possibly to the very edges of perception itself. 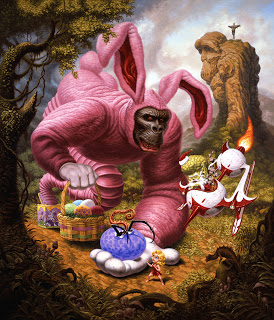 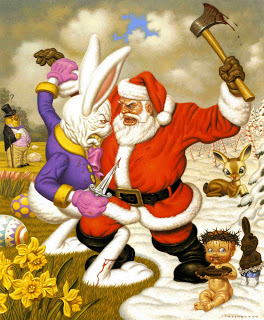 Left: An Ape Allegory Right: Clash of the Holidays

Todd Schorr was born in New York City in 1954 and grew up in Oakland, New Jersey. His parents enrolled him in art classes when he was five, and understandably he claims influences from movies such “King Kong” and the early animated cartoons of Walt Disney and Max Fleischer were (and apparently still are) a driving force in his creative visions.
By the late 1960’s and early 1970’s Schorr was drumming in bands and found further influences in the psychedelic music posters and underground comics coming out of the west coast art scene. In 1970 he visited the Uffizi gallery in Italy and began to formulate an idea of combining cartoons with the painting techniques of the Old Masters. 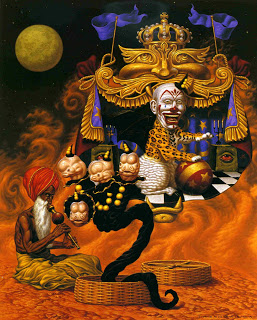 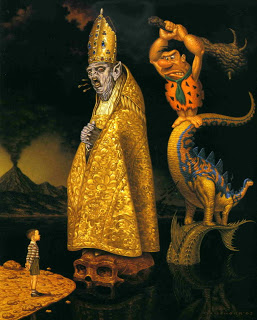 Left: Charming the Haeckel Serpent Right: The Evolution of Superstition

In 1972 he entered the Philadelphia College of Art (now the University of The Arts) with designs towards being a painter, but he was directed instead to the illustration department. Schorr began doing professional illustration while still in college, and soon after graduating in 1976 he moved to New York City where he provided work for a wide variety of commercial projects including album covers for AC/DC, movie posters for George Lucas and Francis Ford Coppola, and covers for Time magazine that now reside in the permanent collection of the Smithsonian National Portrait Gallery in Washington, DC. 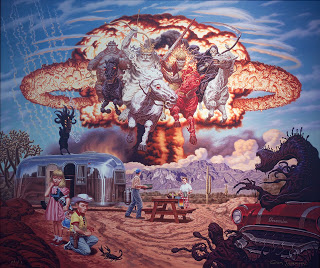 Left: The Atomic Vacation Right: The Anguish of Carl Akeley

By 1985 Schorr had become increasingly frustrated with the creative restrictions of commercial work and began to break away from ad agencies to turn his focus back towards fine. Invited to participate in the 1986 landmark exhibition “American Pop Culture Images Today” at the Laforet Museum in Tokyo, Schorr joined his wife Kathy Staico, Robert and Suzanne Williams, Neon Park, Bob Zoell, Georganne Deen, Mark Mothersbaugh, and Gary Panter in what proved to be a galvanizing experience. By 1992 he had severed all ties to commercial illustration, thanks in large part to the success of a one person show at the Tamara Bane gallery. 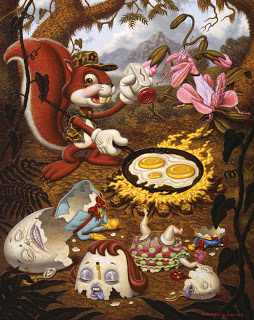 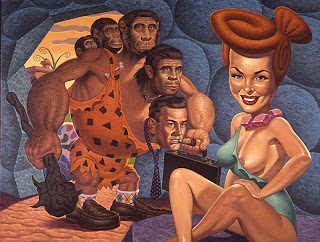 From December 2001 through February 2002 the exhibit “Secret Mystic Rites: Todd Schorr Retrospective” was organized by the Art and Culture Center of Hollywood, Florida. The museum used Schorr’s painting “Clash of the Holidays” on the invitation which provoked some outrage, with various South Florida civil leaders accusing Schorr of blasphemy. Fortunately the controversy died down after meetings between local, state, and museum officials determined that the cost of the county’s heretic burning permit  exceeded the city’s budget for the month. This resulted in a later ruling by the Florida Supreme Court which reduced the sentence for blasphemy from burning at the stake to simple drawing and quartering, under the logic that the threat of fire damage to the Everglades superseded the rights of local preachers to protect their flocks from outside influence.

Today Schorr lives the life of a reclusive billionaire, quietly depicting the reality of a twisted cartoon otherworld while tossing scraps of lobster to his trained pack of hyenas which provide a secure front line between himself and the frothing mass of groupies camped at his gates*. 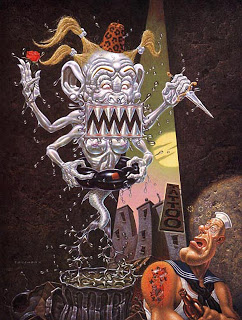 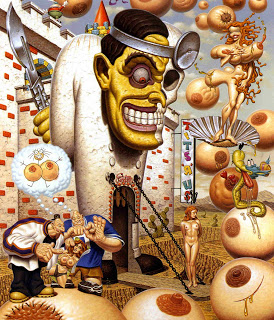 * I made that part about the hyenas up.